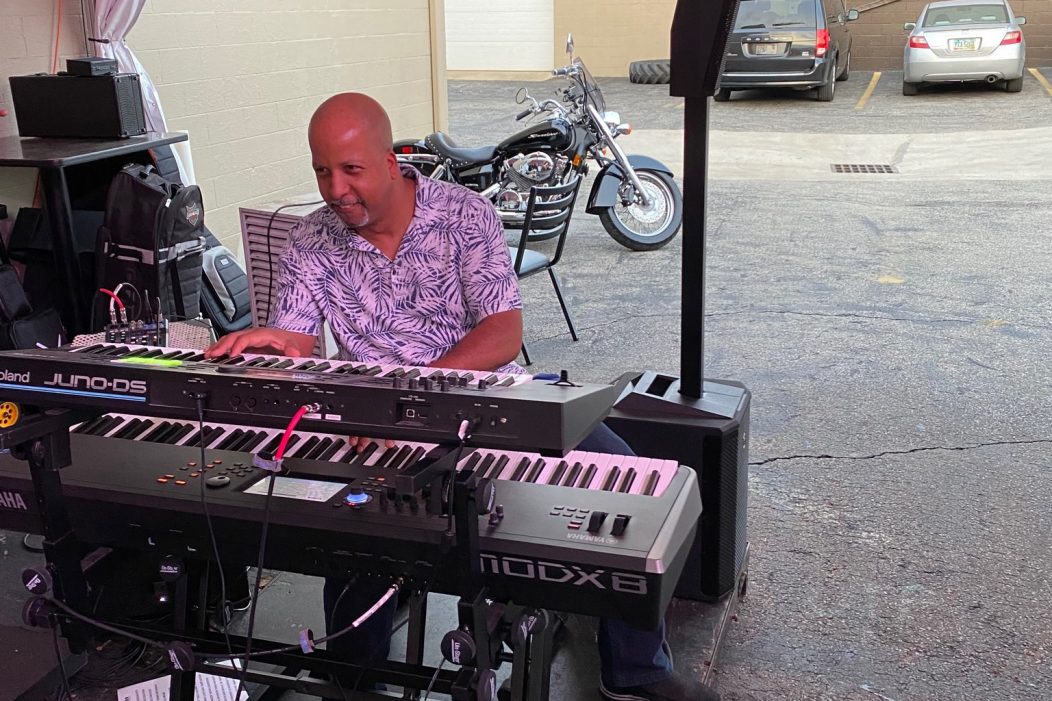 Brandon’s romance with the piano began when he was just 4 yrs old. According to his parents, he was very fascinated with the instrument and would sit down at the piano and “tickle the ivories” just about every day. Initially, Brandon started playing the piano by ear. He taught himself how to play certain parts, sometimes entire pieces of music he heard on the radio, from TV or the movies. Brandon’s mother recognized her son’s immense talent and enrolled the young protégé’ in piano lessons at age 6. His first piano teacher was Dr. Elva Michal, whom he studied classical music with for approximately 8 years. He later developed an interest in jazz and went on to study jazz piano with instructors Andy Knight and the late great jazz pianist/organist, Hank Marr. Brandon started composing his own music when he was 12 years old. This was around the same time he was introduced to synthesizers and electronic music.

His father was instrumental in landing him his first professional gig at Rickenbacker Air National Guard Base when he was 16. Brandon’s talent and determination gave him the opportunity to audition and get accepted at the prestigious Conservatory of Music at Capital University. He graduated with a Bachelor of Music Degree in Jazz Studies. Currently, Brandon is the keyboard player for the award-winning contemporary R&B jazz group, Urban Jazz Coalition (UJC). The other band members include Phil Raney (Electric Bass and Bandleader), Duane Tribune (Guitar), Rico Adams (Drums), Hector Maldonado (Percussion), and Richard Randolph (Sax). Brandon has been with UJC for the last 25 years and has written a number of the group’s most popular songs, including “Jamocha”, “Around 3AM”, “Luquillo Beach”, and “After Dusk”, which reached #45 on the
smooth jazz airplay charts in 2002. Brandon and the band have performed at numerous venues and festivals throughout the country, including Natalie’s’ Coal Fired Pizza, the Easton Town Center jazz series, Columbus Jazz & Ribs Festival, Greater Hartford Festival of Jazz in Connecticut, and the Seabreeze Jazz Festival in Florida, to name a few.

Brandon loves and appreciates ALL genres of music, especially jazz. His biggest influence and personal favorite is the legendary jazz pianist, Herbie Hancock. He is also greatly inspired by the music of Jeff Lorber, George Duke, Miles Davis, Joe
Sample, Kenny Barron, Oscar Peterson, Bobby Lyle, and Ramsey Lewis. While one can definitely hear these influences in Brandon’s playing, he has a true and unique style of his very own.

Brandon is one of the most in-demand keyboardist in the central Ohio area. He maintains a busy schedule which includes his work-from-home duties with JPMorgan Chase Bank, performing local and national gigs with UJC, playing Saturday and Sunday mass services at his church, piano entertainment at Von Maur at Polaris Fashion Mall, as well as solo piano performances at the beautiful New Albany Country Club. When asked how he maintains such a hectic schedule,
Brandon simply says, “Playing music is what I love…it’s who I am!”